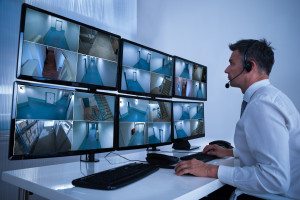 Audio or Video Security for Your Business?

Businesses have long relied on audio and video security systems to protect their premises and assets. Although not everyone thinks of an alarm in terms of audio security, an alarm system will alert you to intruders just as much as a video security camera will.

Security needs, however, are rapidly changing. Over the past 20 years, security threats have increased and intensified, which encourages decision-makers to choose the applications of audio and video security to best suit their facility’s particular needs.

Alarm systems have been and continue to be a necessity when it comes to protecting business facilities after closing hours. Most alarm systems rely on interworking components and devices in order to secure designated entry points and interior spaces.

Such a system is capable of fulfilling security needs, but the company must impress on its employees the importance of following proper alarm arming and disarming procedures in order to minimize the incidence of false alarms, as any sounding of the alarm must always be investigated.

If the system is monitored on site, it will precipitate an investigation by a security guard. If monitored by a security company, the usual procedure is to call the person at the top of the designated call list, and if there is no answer, to try the next person. Since time is of the essence, failure to reach the individual on-call will result in a call to the local police. The consequence is expensive and dangerous, as false alarms can result in hefty fines or danger to subsequent emergencies, as officers are not available to respond to true emergencies.

While CCTV has been with us for years, it was the introduction of IP cameras in 1996 that resulted in the development of sophisticated video surveillance systems. Unlike CCTV cameras which are hardwired into a facility, IP cameras are installed on a company’s Ethernet network, each camera using internet protocol and assigned an IP address just like any other computer. As such, if you have IP cameras monitoring your facilities you can access them in real-time, or view recorded video from your home laptop or mobile device just as you access your email.

Although avoidance of theft remains the prime reason most businesses employ security cameras, they can be invaluable in dealing with special situations.

While any business that keeps sensitive information on the premises must monitor areas where data or files are stored, it has become even more critical for medical facilities bound by HIPAA laws meant to ensure patient privacy. And no matter what your business entails, you need to protect your servers and computers from malicious meddling by hackers. Should a physical breach of security result in data loss, having access to recorded video can aid in forensic investigations.

Terrorism has put everyone on guard for explosive devices. Surveillance cameras can monitor areas for suspicious packages or objects that suddenly appear and if any are detected, immediately alert security personnel.

Conversely, cameras can alert retail store managers or security agents if valuable merchandise suddenly disappears from a showroom or display.

Individuals loitering on the premises or at their entrances may be harmless or they may be individuals plotting vandalism, including the possibility of intent on mischief, or pickpockets. Video cameras can detect the presence of loiterers within minutes and alert security before they have a chance to follow through on their intentions.

All of the above situations depend on what is known as video content analytics, a fairly new option.

Adding cameras with onboard video analytics to the camera network or running special video management software (VMS) enhances video security systems by adding capabilities such as detecting specified events in real-time, performing post-event analysis, and extracting data. All the system operators need to do is define the set of events they wish to be alerted to, and the software will continuously analyze the video in real-time and issue an alert should an event occur that fits the parameters.

The situations outlined above would call for analytics involving:

Analytic ability is also available in audio security in the form of impact-activated audio intrusion detection systems. By interfacing video cameras with the system’s audio sensors, the system can be programmed to detect an impact and push both audio and video data to the monitoring station system while it records the video. This serves two purposes. It allows the monitoring agent to both see and hear what is going on in the building so he can distinguish between an actual break in or just late-working employees who, by failing to follow procedure, accidentally activate the alarm. Such capabilities not only cut down on false alarms, but should an actual break-in occur, they also speed up the notification of police and capture the event on recorded video to aid in subsequent prosecution. While audio can be monitored in real-time the laws of many states, including California, forbid recording a person unless he or she has been warned beforehand and has given permission in advance.